A Canadian footballer Mr. Gerald Dempsey from Newfoundland traveled to Indian surgeon Dr.A.K.Venkatachalam for his special Oxinium Journey knee replacement.
He is very happy to get a quick fire surgical solution within a month of inquiry.
His surgery was performed at the Madras Joint replacement center’s associated hospital by orthopedic surgeon Dr.A.K.Venkatachalam of international repute. Mr. Dempsey was forced into pre mature retirement when the paper mill that he worked for in New found land closed down suddenly.

Mr. Gerald had developed knee arthritis after football injuries and cartilage removal in Canada. He had sought medical attention from his provincial orthopedic surgeons. He was told that he needed a Knee replacement and that too with the Oxinium knee in view of his relatively young age. He was put on a waiting list for a knee replacement in the National Health Service but didn’t like his poor quality of life. When he failed to get a timely doctor’s appointment, he sought surgery abroad. There is no private treatment in Canada. Hence he took recourse to the internet to find medical treatment abroad. Dr. Venkatachalam’s name surfaced on the top for orthopedic surgeons doing the Oxinium Journey knee replacement abroad.
Mr. Dempsey, a man of modest means had never traveled outside Canada before. He was naturally very nervous. Dr.Venkatachalam suggested a suitable airline and helped with getting a visa. He boarded a flight from his home town in Canada to the south Indian city of Chennai. The flight was long but comfortable.
He was accorded a warm reception at the airport which helped in overcoming his nervousness. The hospitality and treatment provided was of a very high quality.
He underwent an Oxinium Journey knee replacement in his right knee. He is now recovering well and will be returning to his home town soon.

He is very pleased with the small scar, painless recovery, and knee bending achieved immediately after the surgery. His greatest satisfaction is to regain his quality of life at a very affordable cost.

He is going to spread the good news on returning to Canada.

Are you looking for a knee replacement alternative in India ? If you are elderly and have other medical problems, then this may be the righ... 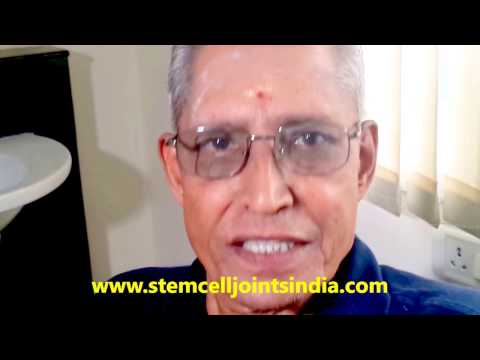